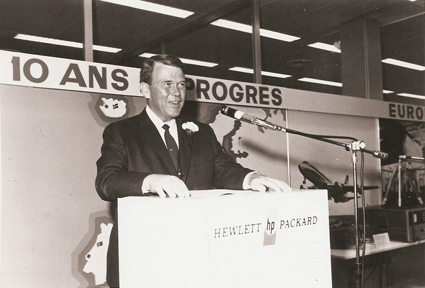 The Hewlett Collection was transferred to Archives 2001 by WRH’s last secretary, Mollie Yoshizumi, who served two periods as his secretary.  After eight years of service, beginning in 1985, Yoshizumi retired on 11/30/93 and was replaced by Judy Arluck.  When WRH no longer came into the office and after Yoshizumi’s husband death, Yoshizumi came out of retirement to work three mornings a week to sort WRH’s files and to respond to or redirect new items sent to him.  WRH died on 1/12/01.  Yhoshizumi continued working at a desk adjacent to the old Hewlett and Packard offices at 2 Upper- Labs until spring 2002 when she began working for the Hewlett Foundation under the direction of Bob Boehm, indexing the last batch of WRH’s files.

In this guide, Bill Hewlett is referred to as WRH; Hewlett-Packard is often HP.

This descriptive guide prepared for the Agilent Archives by archival consultant Lynn A. Bonfield 11-12/02